The action planet Mars is currently going retrograde – or backwards – in Leo. It's starting to put on the brakes and slow to a stop, when it will then go forward. The retrograde or stuck energy will soon be over ... and things are already heating up. 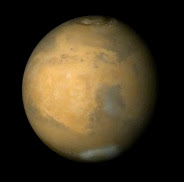 Mars retrograde only occurs about every twenty-two months. The apparent backward motion usually lasts 70 to 80 days in each period. These are the times when we really don't want to start new beginnings having to do with love or vehicles – to name a few. Why? Because aggressive energy is more comfortable moving forward.

I like to wait until a retrograde planet moves past the beginning point of where the inverted motion first started, before beginning any important projects. Mars went retrograde at 19 Leo, and will back up to 0 Leo. Once it's turned around and propelling forward again from 0 Leo to 19 Leo - it will be "in it's shadow". The shadow is the ground it already went past on it's first trip to 19 Leo. The passionate planet will go forward on March 10 and get back to it's starting point at 19 Leo by May 16, 2010.

Mars is so busy with oppositions to planets in Aquarius (Sun, Moon, Mercury, Venus, Jupiter, Neptune and Chiron), there is a great need to act now. It is the most challenging mission to stop the Aries planet Mars from pushing you forward. Please lay ground work and plan all you want. Clear all you want, just hold on until March 10th 9:09 AM PST. Then your actions will have much more flowing and straight action.

Remember, as we get closer to Mars station direct, or moving forward, the juices in your body will be aching to come out. Hold onto your hormone horses just a bit longer. "I feel the need, the need for speed" may be riveting on your brain, but patience is a virtue. Best of luck to everyone on releasing the brakes and forging ahead in the coming weeks.

Posted by Nancy Schorr at 5:27 PM No comments:

Moon Void of Course (MVOC) is an old, powerful tool of Astrology. It is defined as the time between when the moon makes its last aspect (like a conjunction or trine)* in a particular sign, and when the moon enters the next sign.** For instance, if the Moon is in the last few degrees of a sign - say Pisces, if it has no more major aspects to make to any of the main planets, then it is considered "Void" until it enters Aries.  An MVOC in experience is much like the frustrating Mercury retrograde.  Things don't necessarily flow along in an expected manor.

If one is to assume that there is such a thing as “Right Timing” - which is when  things fall into place for the good of all concerned when the time is right - then here's another technique.

For various reasons - It is not generally considered a good idea to begin something new while the Moon is VOC. However, finishing an activity during a MVOC is usually favorable. The problem with starting something during MVOC is that it probably won’t turn out as expected. Modifications, delays, or long amounts of time may become part of the process.

One useful use of Moon Void of Course is to complete unappealing tasks. Great time to make phone calls that you don't want to make. In other words - good chance of missing them. If you want try to delay the outcome of something, start it during MVOC.

Travel – allow more time for traffic. Be cautious. Many feel lost and people lack focus until the moon moves into the next sign. For instance, I would try to avoid booking an airline trip to begin during an MVOC. Same with medical issues. Don’t have the first surgery in a given part of your body during MVOC. Don’t get married during MVOC, unless it is a remarriage to the same person. It's typically not considered a great time to launch a business,  buy a house, buy a car, etc. during MVOC.

Example: The Titanic was launched during Moon Void of Course.

Moon Void of Course time is better spent cleaning up uncompleted tasks, meditating, or doing research. It is the close of a cycle, NOT the beginning….time to chillax.

For more information on Moon Void of Course check out the links below.
http://www.debbikemptonsmith.com/original%20voidofcoursemoonsheet.htm
http://www.topquarkia.com/Docs/Stargazer/voidmoon2004and2005.htm

See MVOC's on this calendar (look for v/c in top right corner of the days):

Back to Main Page

Posted by Shawn Sykora at 11:50 PM No comments:

For those of you who don't own an astrological aspect calendar, here's one (PST) you can print. Double-click on the calendar image below to bring it to full size. You can also drag it to your desktop to save and print.

Free Horoscopes by Astrodienst
CURRENT MOON
about the moon